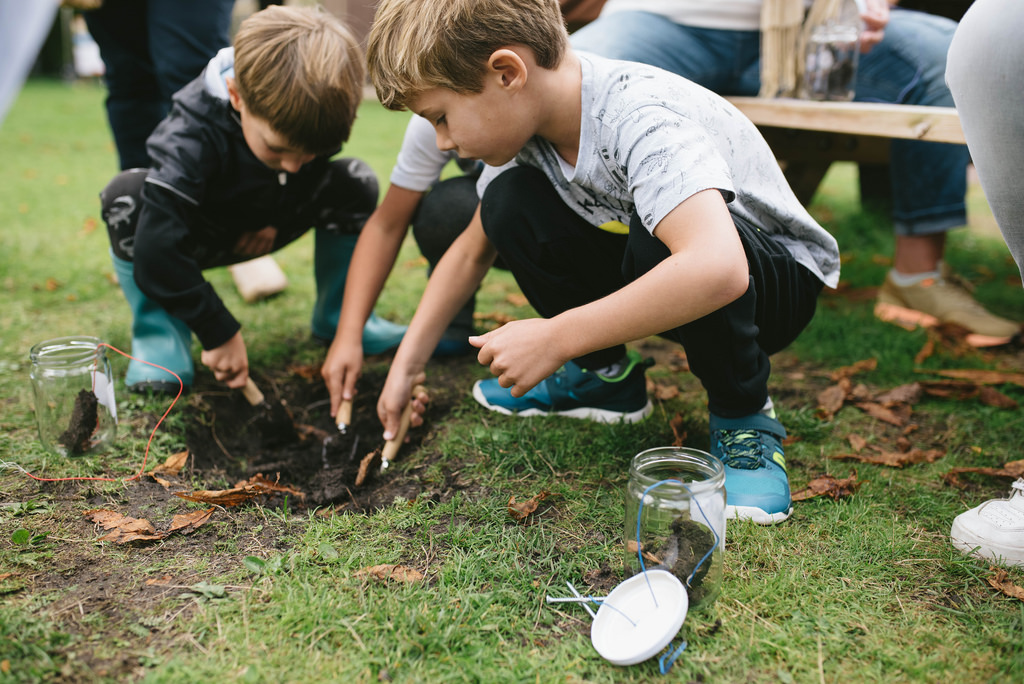 Can you do science experiments with toddlers? That wasn’t exactly the question we asked ourselves at the start of the day, but we did find out the answer.

Waag Society came with Amsterdam Smart City during the “Discovery Days” (Ontdekdagen) at the Marineterrein. The day’s programme was marked by the themes surrounding the Smart Kids Lab (a pilot in the Making Sense project): collecting data from your environment with homemade meters. Facilitated by the beautiful mobile workshop environment of the Science Bus, we researched water, earth, light, and sound. There were, unfortunately, showers forecasted during the program, and the weather might have been the reason that our program wasn’t booming with participants. But after our flexible team adjusted the workshops to suit a much younger age range, we were able to get started with some enthusiastic young children and their parents.

There are two different types of mud batteries. In one of these, the microbes in the mud generate the current, and in the other, the mud serves as an electrolyte. The whole process is, of course, a complicated story to explain to a small child. But when you can attach a pair of wires to some pieces of metal, throw them into a jar full of mud, and then get a reading on a multi-meter? That’s pure magic. We measured the different electrical outputs of different types of soil, which can tell you something about the composition of that soil. The contest for “who can make the best mud battery” was fun, but some of our smart toddlers seemed much more interested in digging up the ground with their shovels. We had to keep them somewhat in check so they didn’t dig up the entire lawn. 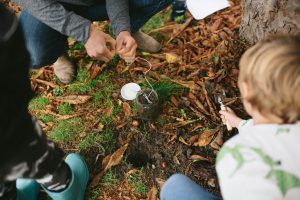 There’s a substance in red cabbage (anthocyanin) that changes color depending on the acidity of the environment. That is, like the mud battery, a complicated story to explain to a toddler. And when your goal is to get the children to shred a few leaves of red cabbage and then puree those leaves in a blender to make a “magic potion,” you have to keep their attention. The resulting red cabbage juice was divided into plastic cups. We then mixed it with water from various sources like the Ij and the fountain, and also, of course, with apple juice and Coke. Our main conclusions? Coke and apple juice are bad for your teeth and the rainwater is less acidic than it was in the 80’s! 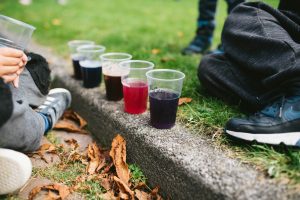 The principle behind the particulates meter is very simple. You take a piece of white cardboard and smear it with Vaseline. Dust particles in the air will then stick to the surface. This is an easy and insightful experiment, but unfortunately is not one that gives you immediate results. Of course, you can still enjoy the beauty of the meter, and that’s just what our little researchers did. 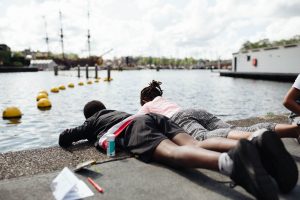 Later in the afternoon, we also worked with some older children (8+). This was good because making an EC meter is quite a fiddly, detailed job. But, fiddly work aside, it proved to be a beautiful activity for the whole family. The EC meter measures the degree of electrical conductivity in the water. We had prepared a number of pre-packaged devices that could be assembled without soldering. When the meters were finished, the temptation to go test water everywhere proved too great to resist. There were even daredevil missions to retrieve water from Oosterdok. Together, we came to the understanding that rainwater contains few minerals and that the water near the Marineterein is a little bit salty, likely because of the connection with the IJ, the North Sea Canal, and the North Sea. 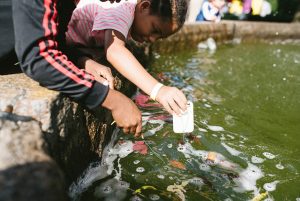 Noise levels and a sound safari

We topped off our programme at noon with measuring noise levels in different places. With a smartphone in hand, we went on a “sound safari” around the Marineterein. We found pleasant noise levels in the beer tent, annoying noises along the highway, and a nice, quiet spot by the water. The whole day came to a spectacular end when we measured the Science Bus’s horn, which was 100 decibels. 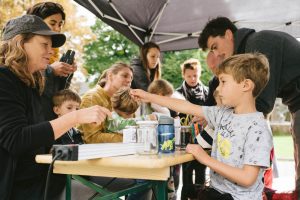 One of the goals was to map out our results from the Marineterein. After each experiment, children were allowed to share their results by sticking stickers on a large map. The end result will be displayed on a wall at Amsterdam Smart City.

So back to the question: can you do science experiments with toddlers? The answer is, yes! They may not always understand what they’re doing, but if they’re interested in experimenting and are having fun with it, a seed may have been planted in their heads. The experimental toddlers of today could be the scientists of tomorrow! 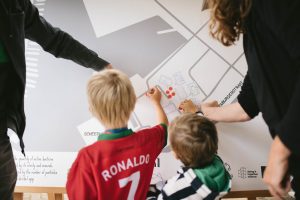 Note: Each of these experiments tell us something about a certain aspect of the substance being measured, but determining whether or not a reading is “good” or “bad” is a subtle art. When you get a reading on your EC meter that the water you’re measuring has a strong current, it might be because the water is salty, but also could be because it’s acidic. You can answer questions like these by doing another type of experiment. Of course you can say, when you measure extreme values, that the water you’re testing is probably not good for drinking.

Smart Kids Lab is one of the tree Amsterdam based pilots from Making Sense, a European project that explores ways to stimulate community driven data collection and action on environmental issues.