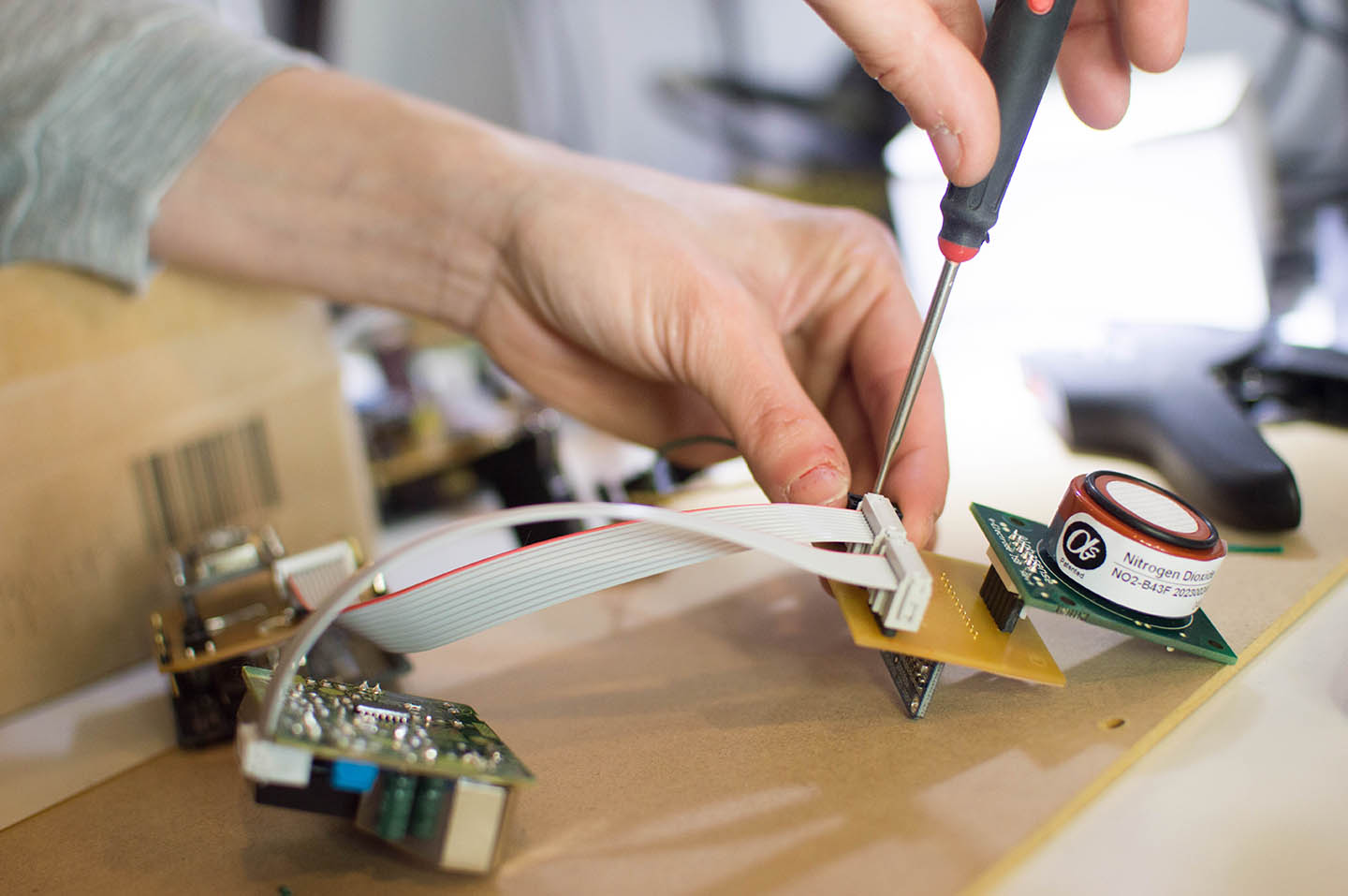 What if you can combine the experience from the maker movement to create open source hardware and software to map environmental issues that concern citizens everyday? In this post we would like to show you the process of developing a sensor that was designed to answer questions about air quality from an interested community of citizens.

When the first Amsterdam-based pilot started, it was soon decided that this was going to be about air quality. There was some great experience at the Waag Society on the topic, combined with a community in the city centre that had air quality on the top of their agenda. So the challenge was to develop an air quality sensor that was able to answer the urgent questions from citizens in the community.

The starting point of the development of the sensor were the citizens’ concerns. It was loud and clear that it should be able to measure air quality on a high level of reliability. The yearly averages were already measured by environmental organizations like Milieudefensie and official measurement parties like GGD Amsterdam were already measuring at some points in the city. What we needed was a sensor kit that could point out the difference from street to street, door-to-door and even difference between ground floor values and the air quality on a balcony on the sixth floor. 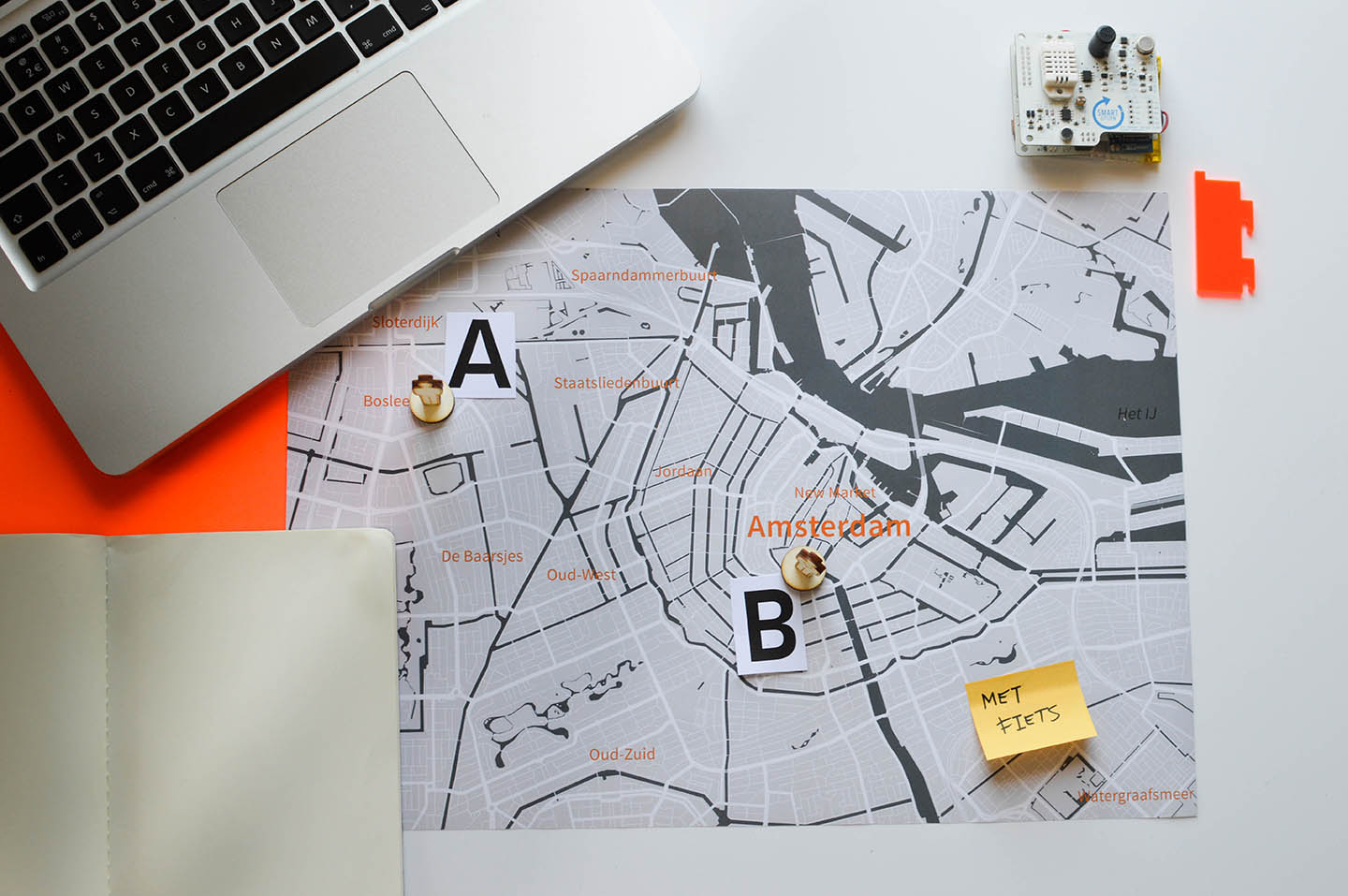 From previous experiences in our Amsterdam Smart Citizens Lab, we had some good insights in what kind of hardware was needed to develop a good working kit. During this previous project, a specialized air quality team tested the Alpha Sense as being the most reliable low-cost NO² sensor on the market. Another useful insight we got from Public Lab, which is a great inspiration for much of our work. They experimented with a sensor that measures PM (particulate matter) on a very reasonable level. So these parts were chosen to be the base of the sensor kit. To be able to calibrate the measurements we added a humidity and a temperature sensor. Building further upon the work of Dave Gönner (who was the main hard- and software developer of the kit), hardware expert Emma Pareschi was responsible for the technical supervision and final adaptation.

Production in a Fablab

Normally a Fablab is designed to experiment, test and create prototypes. For this kit we needed a production on a scale that was pushing the limits of our Fablab. Although there was no other option, production on this scale doesn’t really belong in a Fablab. Since you normally don’t produce sixteen prototypes, but only a few. So the production put the Fablab to a test, which eventually was fulfilled in time, but could have been done more efficient in another place of production. 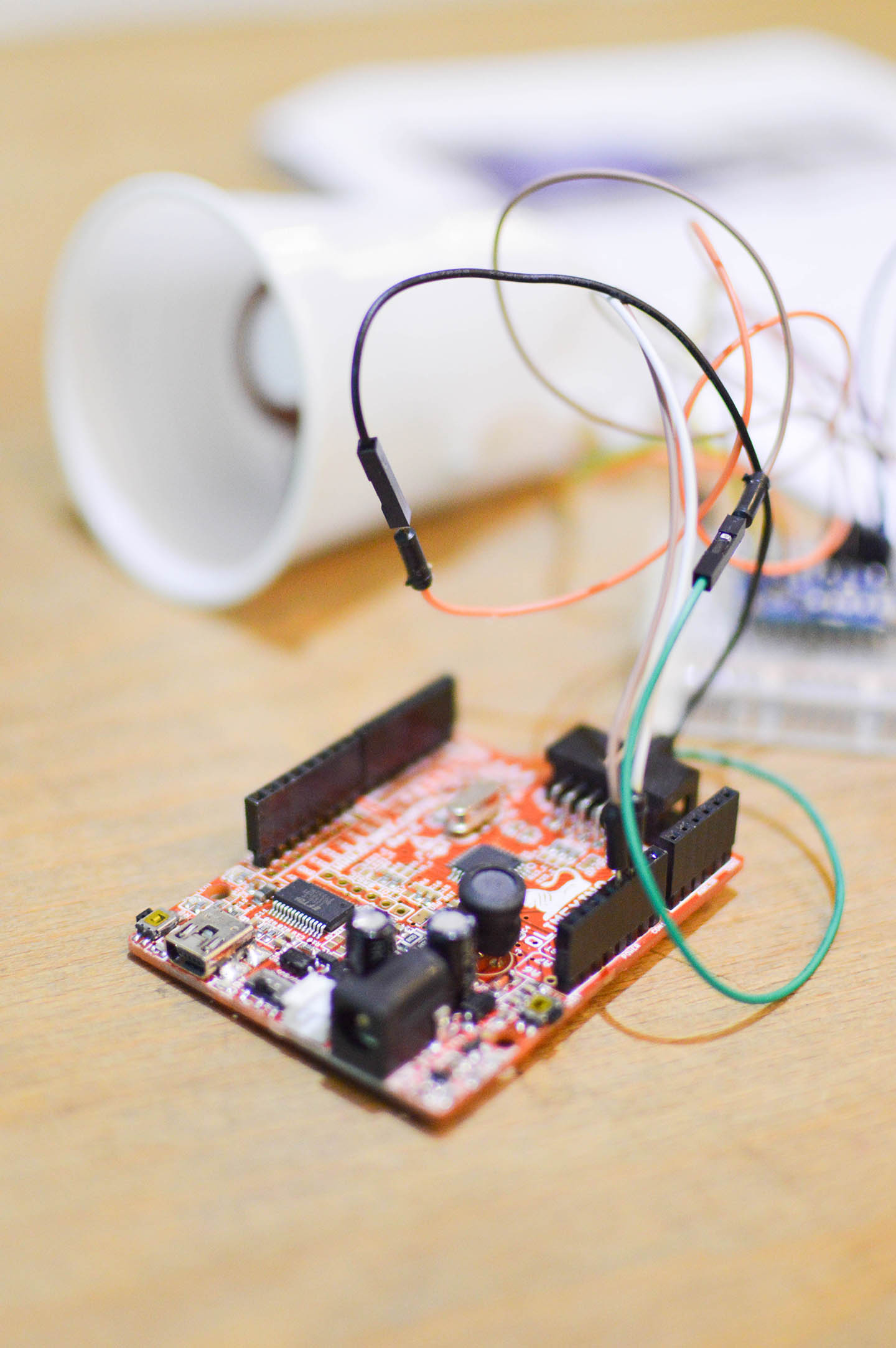 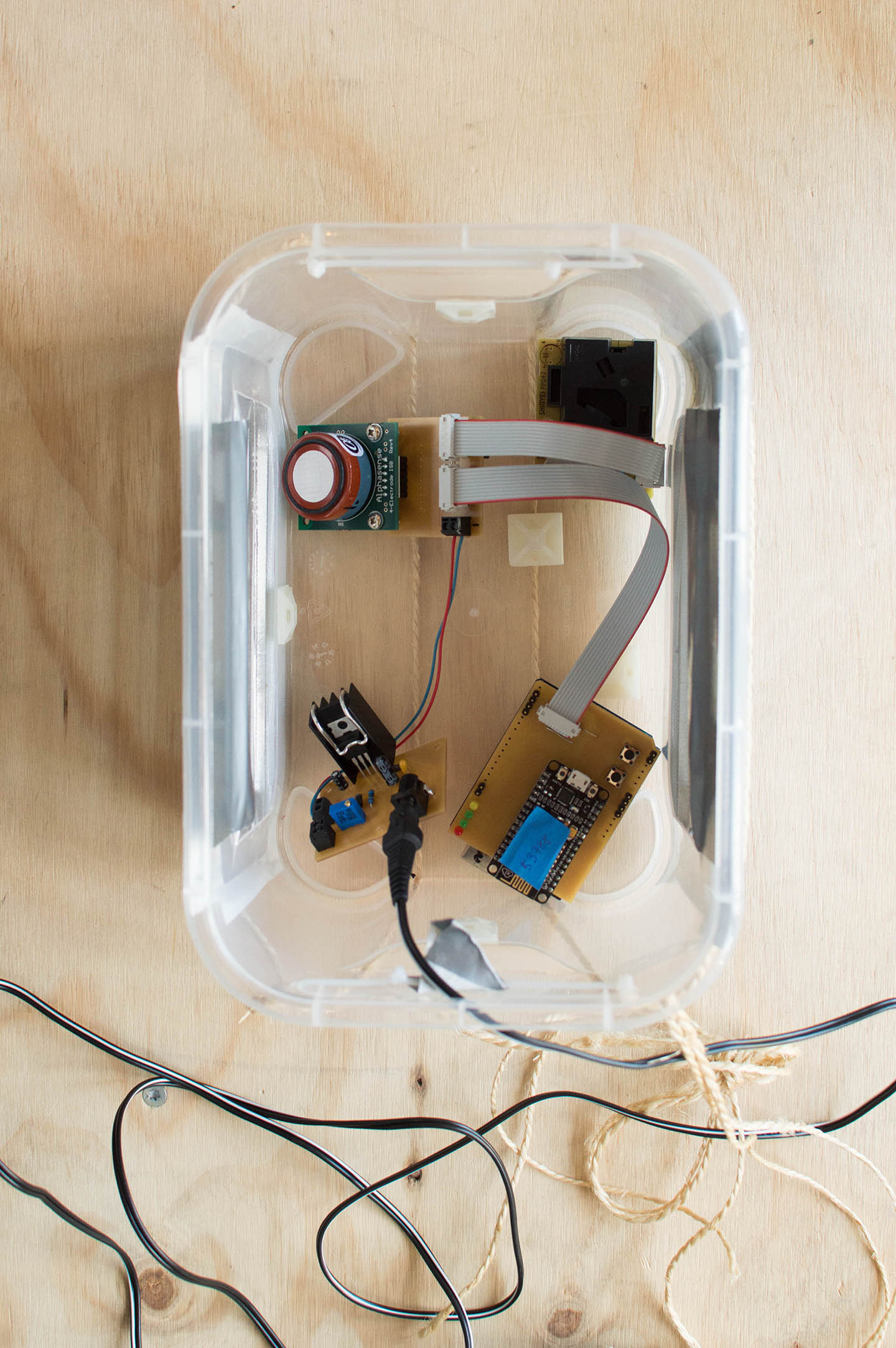 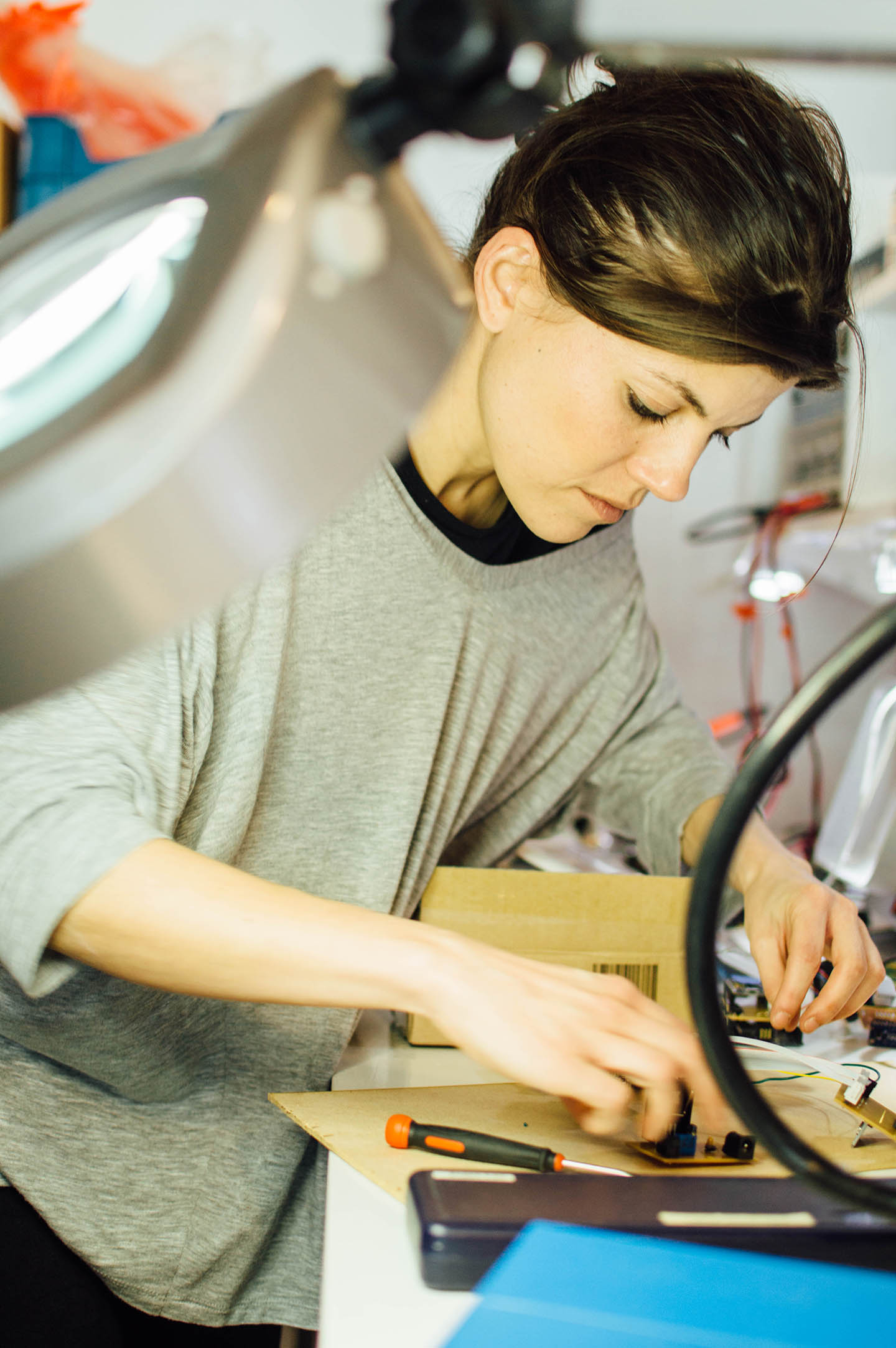 Wi-Fi, at this moment, is the most reliable form of wireless connection for non-portable systems. This is why a Wi-Fi module was added to the sensor kit. Although this added some challenges to installing and connectivity. Since the sensor was supposed to work outdoors, we often worked on the limit of the reach of the wireless systems of the users. These flaws in connectivity often created some frustration with the users of the kit. Frustration that was sometimes easily cured, by plugging the sensor out and back in again. 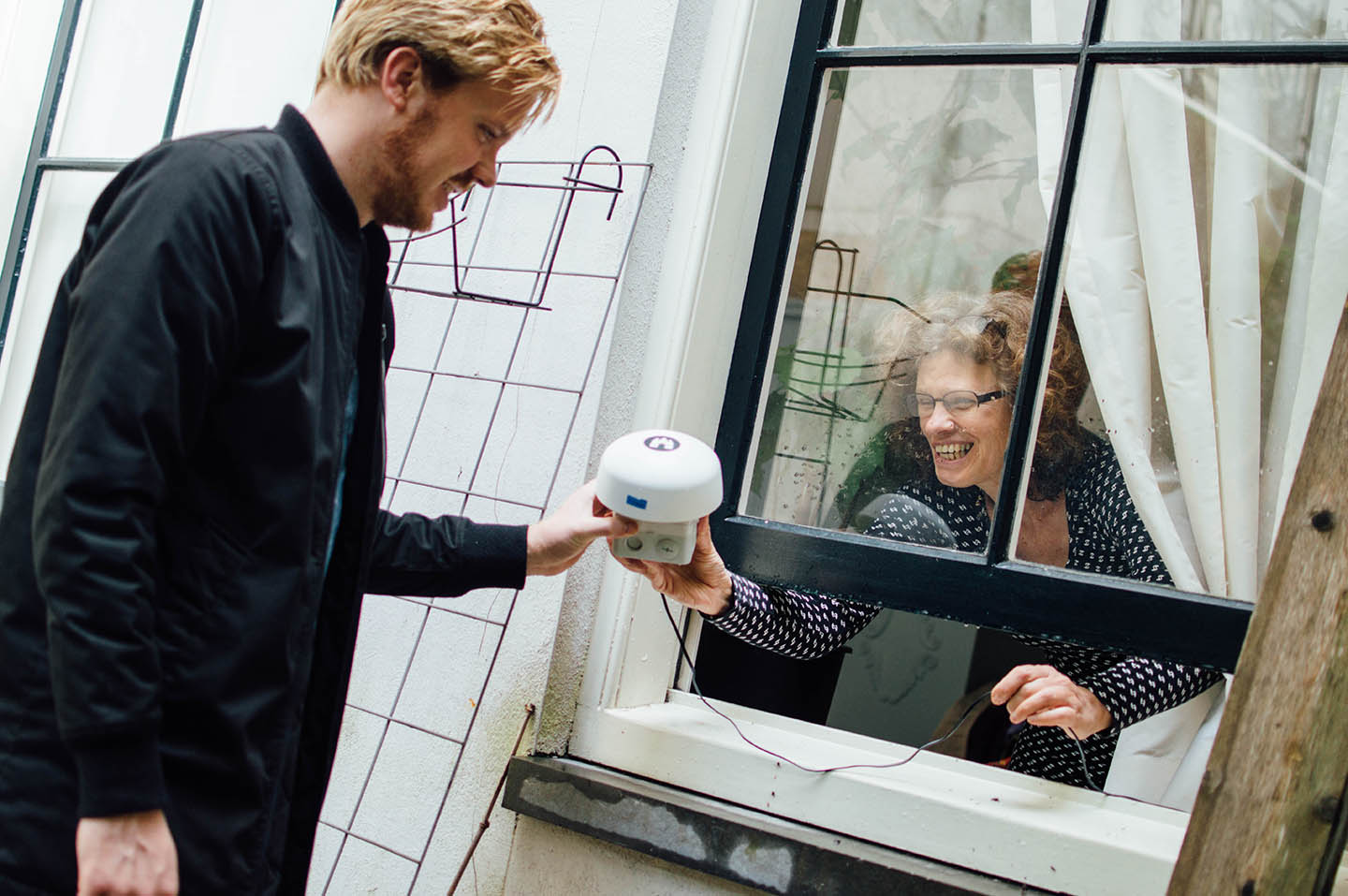 Sometimes the wireless modem from the participant was hard to connect to the sensor, where in some cases people connected their sensor to a friendly neighbour’s network. A full time Wi-Fi connection also means a lot of power consumption. That is why we needed to feed the sensor kit with electricity from the power grid, a portable stand-alone option wasn’t possible. This was also taken into account during the placement of the kits.

To be able to calibrate the sensors, great assistance was found in official air quality measurements parties like GGD Amsterdam. With their high experience in air quality measurements, we were able to combine their official stations with our sensors and calibrate our kit. Another great partner was found in KNMI who helped to calibrate and interpret the complex data coming out of the sensors. With the help of this interpretation participants were able to see real time values of their sensor online. Answering the citizen’s questions will also be done with great help of KNMI. 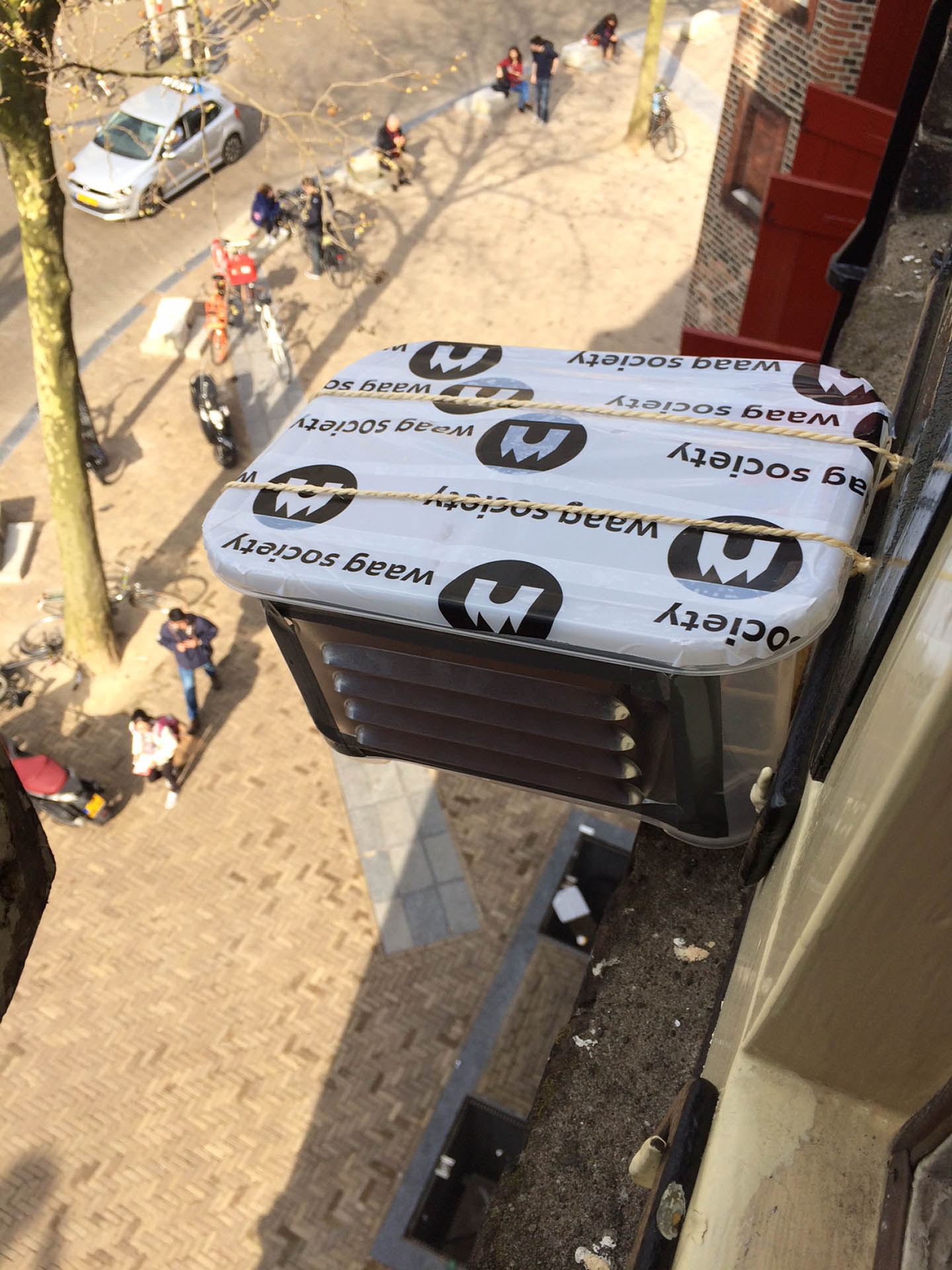 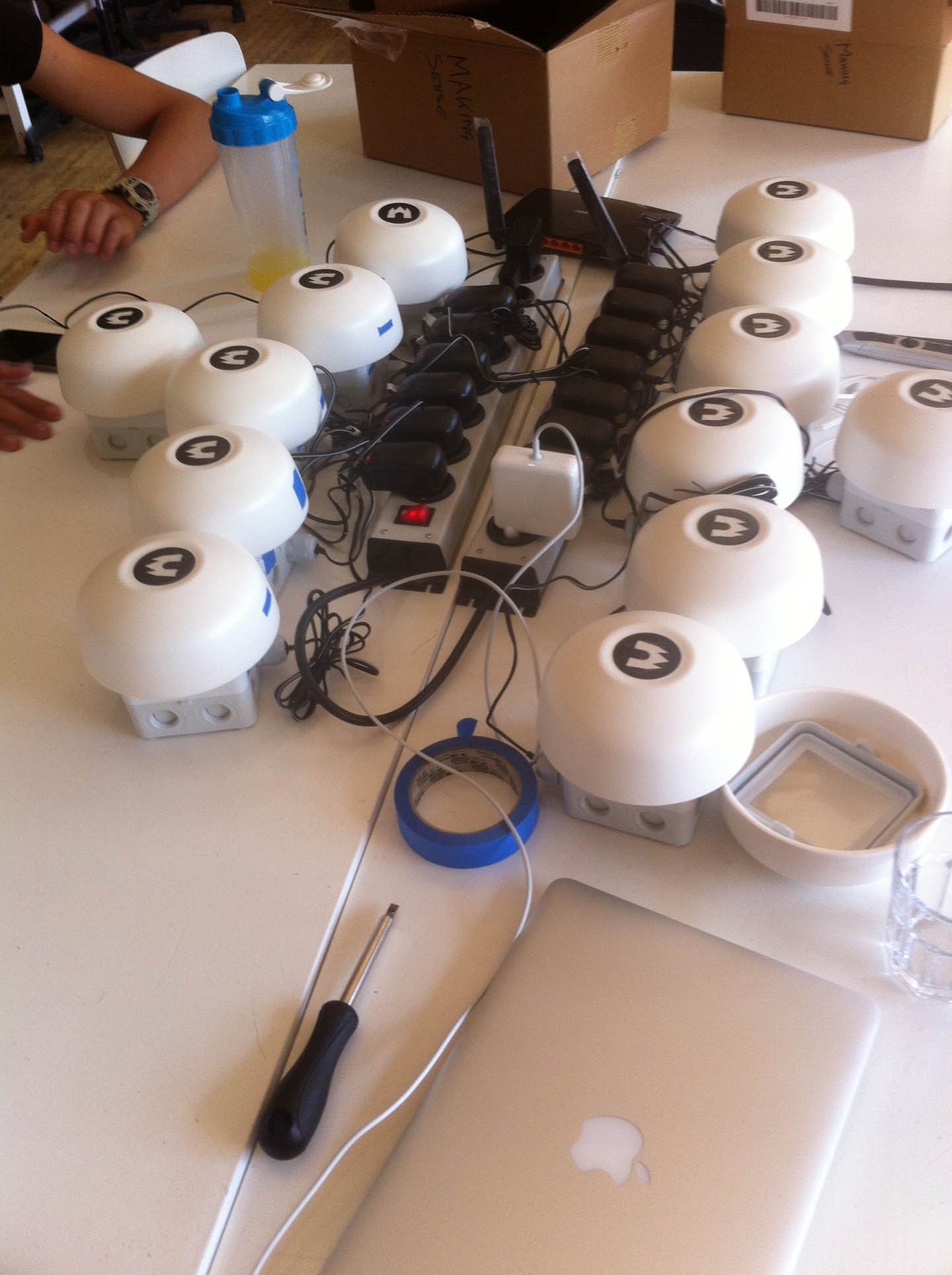 Of course we hope to develop the kit further. If not done by ourselves, everyone can build upon the existing knowledge. This kit is a modular solution, with open source hardware and software all documented onGithub.

In our near future we will experiment with the new LoRaWan technology in our projects. For a better wireless connection than Wi-Fi, the LoRaWan network could be a huge step forward. It would enable easy wireless and mobile measurements that could greatly attribute to answering citizens questions on the topic of air quality. To summarize, this air quality sensor kit is not the final result, it is the beginning of something bigger and better!

The sensor kit is developed together with many partners including: RIVM, Universiteit Wageningen, Alterra, GGD Amsterdam, KNMI, Public Lab, and many more.