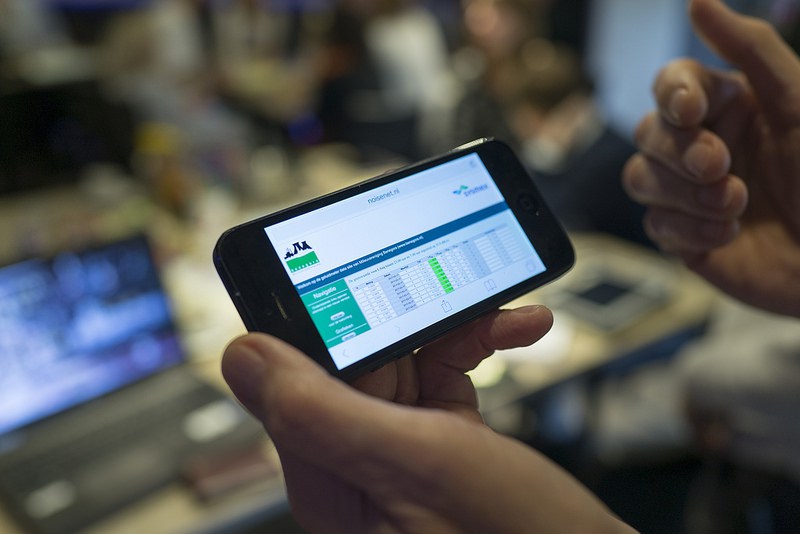 The explosion of reactor number 4 at the Chernobyl nuclear power plant on 26 April 1986 was the most terrible nuclear accident the world had ever known. Soviet authorities, however, stayed silent on the disaster. Two days later and over 1,000 km away, an employee at the Forsmark nuclear plant in Sweden detected unusually high radiation, forcing the Soviet government to publicly acknowledge the tragedy.

Hopefully nothing remotely as catastrophic as the Chernobyl or the Fukushima disaster will ever happen again. However, if you live in the proximity of a nuclear power plant, you might want to have access to reliable data about any variation of radiation levels in your neighbourhood. 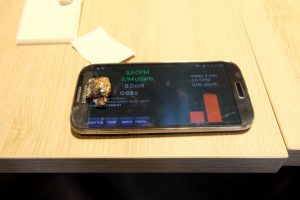 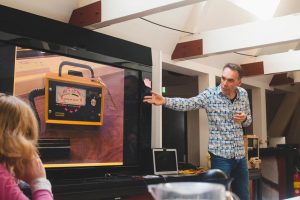 The developers of GammaSense believe that citizens should have at home the tools and means to monitor radiation levels. Immediately, inexpensively and with a fair level of accuracy.

The team found out that it is possible to use devices with a CCD or CMOS-based camera as gamma-detectors. Research by the Australian Nuclear Science and Technology Organisation has indeed demonstrated a correlation between the amount of gamma radiation and the number of white spots and streaks that appear in photos taken by phone which cameras have been covered with black tape.

The aim of the GammaSense project is to develop an open emergency-infrastructure that can be deployed within minutes, using only your laptop or smartphone and a piece of black tape.

When you cover your camera with a piece of aluminum foil, which is covered with black tape, you can start measuring. Cameras and webcams can thus capture the Gammas radiation and convert them into one unit per minute. This allows large increases to be captured and plotted on a map.

The experimental platform is still in development and being tested through a series of workshops with citizens, experts and policy officers who live in the vicinity of a nuclear plant. The workshops are also organized in cooperation with municipalities, RIVM (The Netherlands’ National Institute for Public Health and the Environment), WISE International (a NGO that is campaigning for cleaner energy since 1978) and Waag Society (the motor behind the project.)

GammaSense is the third Amsterdam-based pilot of Making Sense, a CAPS project with participating pilots in Barcelona, Pristina and Amsterdam. Making Sense’s key objective is to empower people with technology that allows them to get a more hands-on understanding of their immediate environment. Next to awareness on the topic, it will show the potential of citizen-driven data collection, which eventually leads to people making more informed decisions on behavior in their environment.

The pilot version of the radiation monitoring tool is available at www.gammasense.org 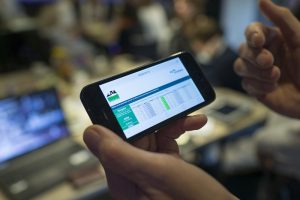 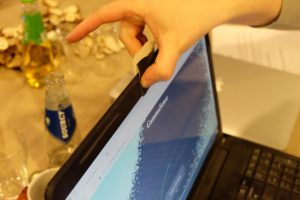 I asked René Post and Ivonne Jansen-Dings from the Waag Society in Amsterdam to tell us more about GammaSense:

Hi Ivonne and René! I’m surprised at how simple measuring gamma radiation is. I just open the GammaSense page, put black tape on my webcam and that’s it. Or did i miss something? Is it magic? How can it be that simple? Where do you get the data for the measurements?

No, you are completely right, that is it. It is known since 5-6 years that gamma rays produce white dots on CMOS-based cameras. By completely covering the eye of the camera with black tape, all visible light is blacked out. The remaining light that is registered by the camera, is a combination of faulty pixels (degeneration over time) and background noise. This background noise normally consists of a very low level of natural gamma radiation. Since you can look at gamma rays as supercharged light particles, anything less then centimeters of lead will not stop them. So the black tape means nothing to the gamma rays, and functions like a filter to block out all other forms of light.

With a base-measurement, it is possible to measure the combination of the degradation of the camera and the background noise. When we have that value, and we see sharp increases of white dots, we know it must be due to what we call ‘man-made radiation’.

What the gammasense-platform is doing, is counting the white dots per image from the video- stream, and from that we calculate a ‘counts per minute’: the number of occurrences per minute. This is exactly what the traditional measuring device for gamma radiation, a Geiger-Müller tube, is doing. So by a completely different (digital) route, we have measured something that could only be done before by the analogue Geiger-Müller tubes.

The advantages of this method are that the sensors are already in our homes on the day that they might be useful. The disadvantages, are that the sensitivity of the webcam is lower compared to standard measuring devices. Several labs have performed comparative research and they showed that the usefulness of the mechanism is actually quite good, and seems to be more dependent on the quality of the formulas that are implemented to analyze the stills.

In the project, we aim for a long-term collaborative strategy, by open innovation on Github. We have compiled a first version that runs on Chrome and are in the process now of releasing the formula that comes out of analyzing the results from data-dumps we have performed at the nuclear lab of the RIVM in Bilthoven, the Dutch official institute for environmental research.

Gammasense.org is the first website on the Internet that makes it possible to measure gamma radiation directly, without installing an app. As underlying protocol, we rely on WebRTC.

Another unique feature is that apart from the site and formula, the data is open as well. The idea is that when something happens in say France in 2021, people can instantly copy the files and begin to mobilize their local environment to join in the measurements. Institutions can jump in, and do calibrations for certain types of phones, which will make it very easy to interpret sections of the data because they all used gammasense.org to upload their data. 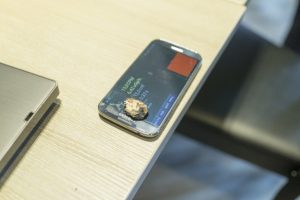 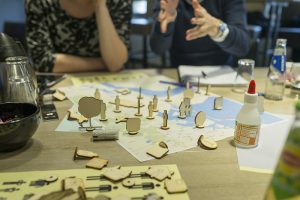 In one of the blog posts you write “Information about incidents concerning nuclear radiation usually takes around 3 days to reach citizens.”I had no idea it took such a long time. Do you know why citizens are not informed faster?

It is an combination of bureaucracy, fear of causing panic, unavailability of facts, cross-border communication etc.

Won’t people obsess and worry too much whenever they notice small discrepancies in measurements from one day to another or from on street to another? Aren’t you afraid of spreading paranoia? Of seeing people desert certain areas of a city?

We do have a responsibility to deliver a useful tool. So the relatively large measurement error forces us to be really careful with statements. If ‘1’ is OK, then ’10’ means something could be happening, ‘100’ something is surely happening and ‘1000’ please leave the area. That is why we need to do this together with the institutions that are already responsible for delivering the kind of data on a daily basis to the authorities and the public. 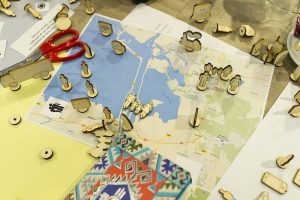 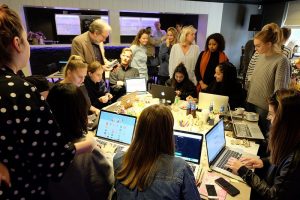 By now, i think you’ve done workshops in the cities of Bergen op Zoom, Eindhoven and Maastricht. Are these events just about demo-ing the technology and showing people to use it? Could you describe what happens during the workshops?

The workshops were intended as co-creation sessions, and to some extend they functioned that way. We quickly learned though that at first we assumed way too much knowledge: in the first workshop we had an audience that for a large part didn’t have the faintest idea what gamma radiation could be. Something to do with wifi or smartphones, was the general feeling. What a nuclear power plant was, what it produced and why, most people in the room had no idea. So we did get some usable feedback, but the phrase co-creation was not at all times completely justified. But in another way, it made it very clear to us that this is the level of knowledge that we need to adapt the tool to. 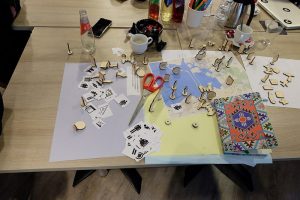 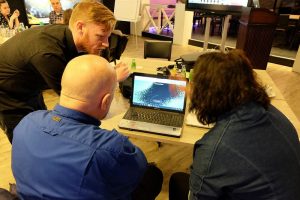 How do people react? Do you feel that citizens have different concerns from one city to another? Different levels of awareness?

In some cities, like Bergen op Zoom (in the vicinity of the nuclear power plant in Doel) and Maastricht (not too far from the plant in Tihange), there was much more awareness compared to Eindhoven, which is a bit further away.

Since the tool was still in its infancy, we had more theoretical discussions. The fact that the RIVM and WISE International were there as well to present their take on the matter greatly helped the trust people had in the project that Waag Society was carrying out.

What can people do with the knowledge acquired through the workshops? What happens after the workshop?

We hope the workshops strengthen a DIY-mentality and raise awareness of the fact that when we need data, we can quickly organize ourselves and generate it together. People are being kept informed through our newsletter on the progress of the tool. For instance, with the incorporation of WebRTC into iOS coming september, all iPhones will be able to run the tool as well. 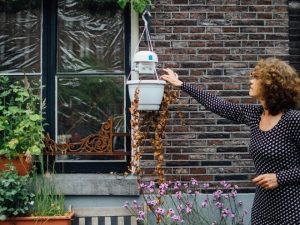 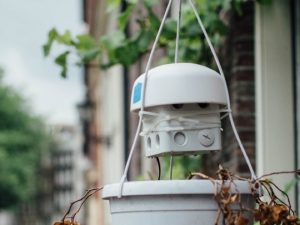 This project is the third Amsterdam-based pilot of the Making Sense program, could you sum up briefly what the previous pilots were about?

The first pilot was aimed at DIY air-quality measurement with civilians who lived on certain streets in Amsterdam that were among the most polluted in the Netherlands.

The second pilot was called Smart Kids Lab, where schoolchildren where shown how to measure their environment with very simple means. Examples where the acid in water-meter and the particulates meter for fine dust particles in the air.

Thanks Ivonne and René!