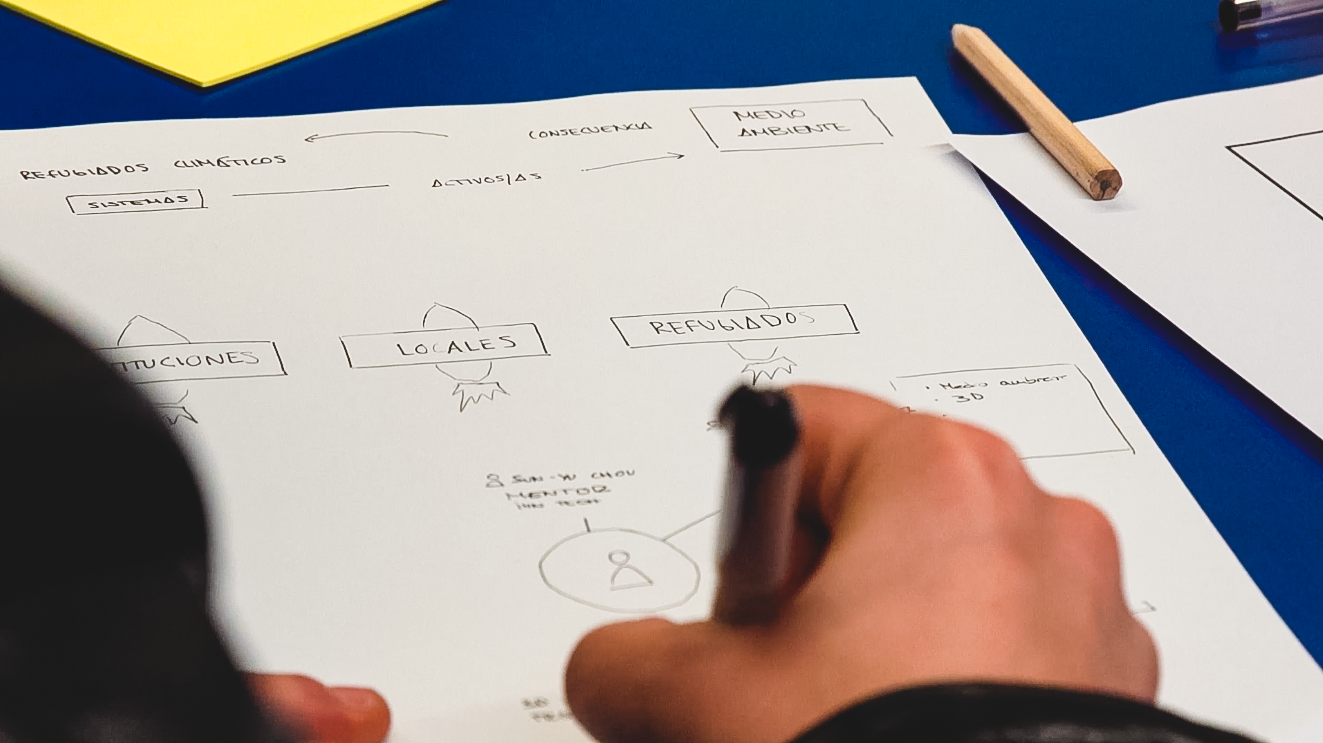 What if we could project ourselves into tomorrow in order to learn how to address the problems of today?

That is exactly what the recent Making Sense workshop at Ouishare Fest BCN asked participants to do. Team members Alexia Mellor (University of Newcastle) and Valeria Righi (Ideas for Change), along with Paul Marie Carfantan, (Civic Lab Barcelona), led a workshop where participants designed Futureville 2050, a (not-so-fictional) future Barcelona that has been ravaged by climate change.

Starting with the current issues climate change creates such as rising sea levels, climate-related migration, air and noise pollution, to name a few, we imagined what impacts these social and environmental problems might have on Futureville 2050 and its residents.

During the first part of the workshop, we looked at some of the ways that sensor technologies have been used to capture data on environmental issues, ranging from AqMesh’s air quality sensors placed outside buildings to measure pollution, to Plume Labs’ air quality sensors attached to pigeons and to cyclists, to the Vienna Summer Scouts project tracking the approach of summer by assessing how much sunscreen is in a swimming pool’s water.

AqMesh’s sensor is an example of how we have traditionally thought about sensors: something to hide away in the background. The Plume Labs projects look at how we can make sensors localised and mobile at the same time, while the Vienna Summer Scouts project measures human actions – applying sunscreen as the sun intensifies – to sense the arrival of a natural phenomenon – summer. Where these projects measure environmental data, we also looked at projects that use measures other than sensors to explore and visualise our relationships with the environment. Artist Tega Brain’s Coin-operated Wetland is an installation that links man-made and natural systems by attaching washing machines in a gallery to a miniature wetland as a natural filtration system. Visitors to the gallery are invited to wash their clothes in the machines.

Finally, we looked at Revital Cohen and Tuur van Balen’s Life Support project as an approach to problem-solving by linking two very different systems. In this project, the issue of retired greyhounds once used for racing, and human respiratory problems are both addressed by merging the two, creating a new system in which the dog’s lung power is harnessed to assist its owner’s laboured breathing.

The Sensing examples offered ways of thinking about how and what we sense, our relationship to the environment, and how we might be able to address separate, unrelated problems by bringing them together. So how might we use this approach to address climate change in Futureville 2050? Participants (aka citizens and stakeholders of Futureville 2050) gathered in small groups to develop a fictional narrative centred on a specific environmental issue and the potential ways residents might be affected by and contribute to dealing with it.

Each group was provided with one topic (soil pollution, water pollution, air pollution, noise pollution, and light pollution), along with a variety of persona cards that described some of Futureville’s residents, their backgrounds, interests and resources.

These personae included climate refugees from the Maldives who had a background in tourism and communication, a retired environmentalist with limited tech skills, as well as a bat and bacteria in order to consider the impacts and potential benefits of other lifeforms. 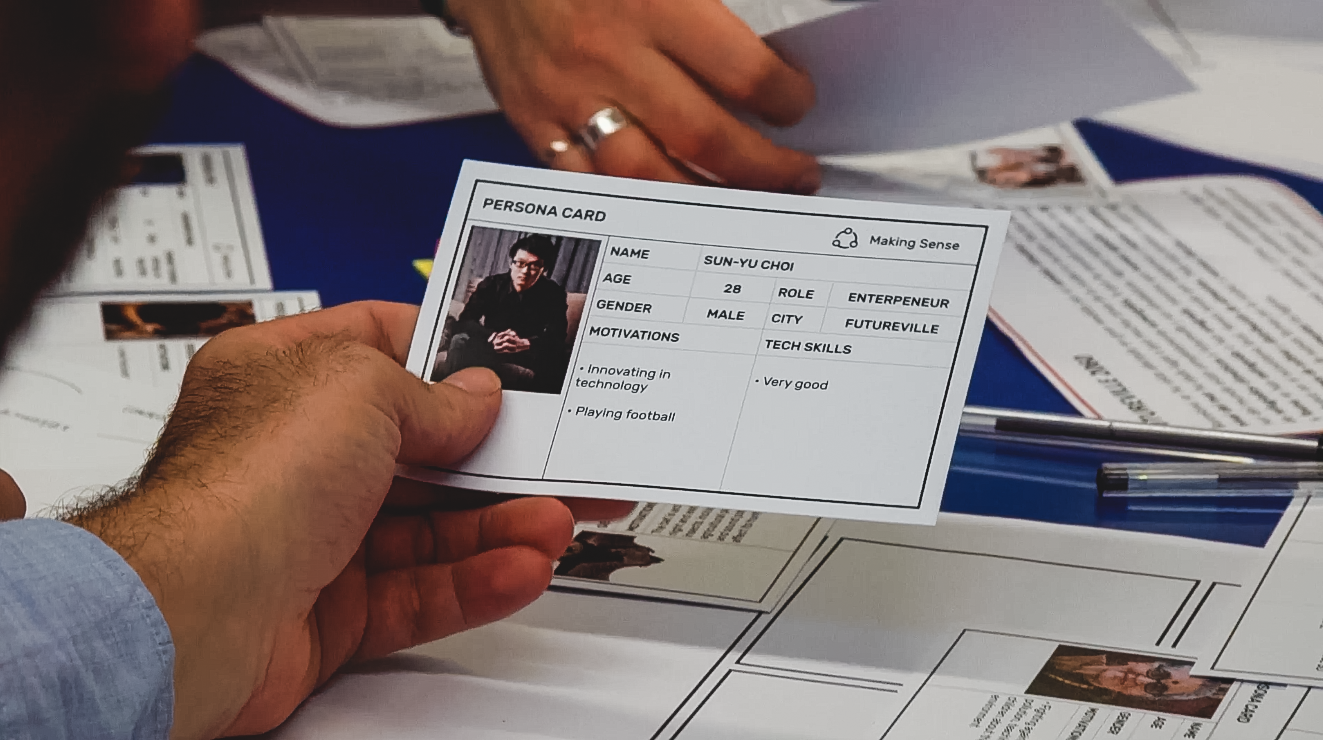 The aim of developing the narrative was to understand the interconnections between environmental problems, social issues and infrastructures, and to explore the inherent skills and resources people and their experiences bring to the table. In suspending disbelief while addressing Futureville 2050’s issues, all current rules and systems could be completely rethought.

After developing their narratives, each group presented their imaginings of Futureville 2050. One group discussed changes in social activities as the climate changed and caused different uses of public place. The group members imagined Barcelona turning into a series of islands due to flooding, and residents would respond by creating new ways to connect. Instead of football being the sport of choice, water sports would become fan favourites. Another group proposed designing a new form of parliament based on resources, and suggested that in addition to the public being represented, wildlife and bacteria would also have representation.

Participants thought about the ways that technology, particularly Civic Tech, could be used to address the problems they identified in their fictional scenarios. They began to think about the connections between groups’ issues, the potential infrastructures needed, and how technology might facilitate Futureville 2050 residents to make changes. Paul Marie led the discussion around how Civic Tech technology might enable greater public participation in informing and improving government infrastructure with the aim of contributing to the public good. 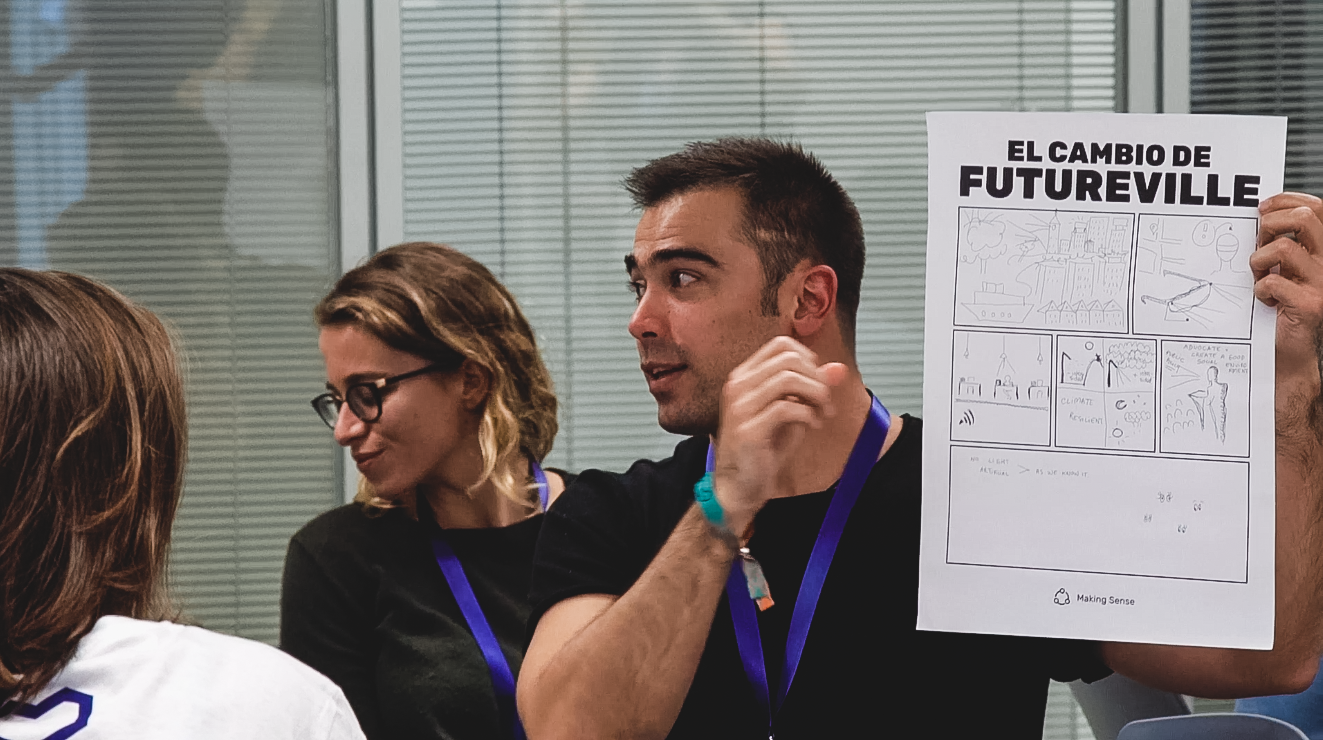 Making Sense, as an example of Civic Tech, uses technology to put the focus on people by empowering them to understand the environmental issues in their communities and facilitating ways to take meaningful action. Civic Tech has the potential to bring people together to make positive changes. People are at the heart of technology, and at the core of Civic Tech. By taking a step back and thinking laterally about the values underlying our decisions, we have the chance to implement Civic Tech in an inspired way to address the core changes we want to see in our societies. 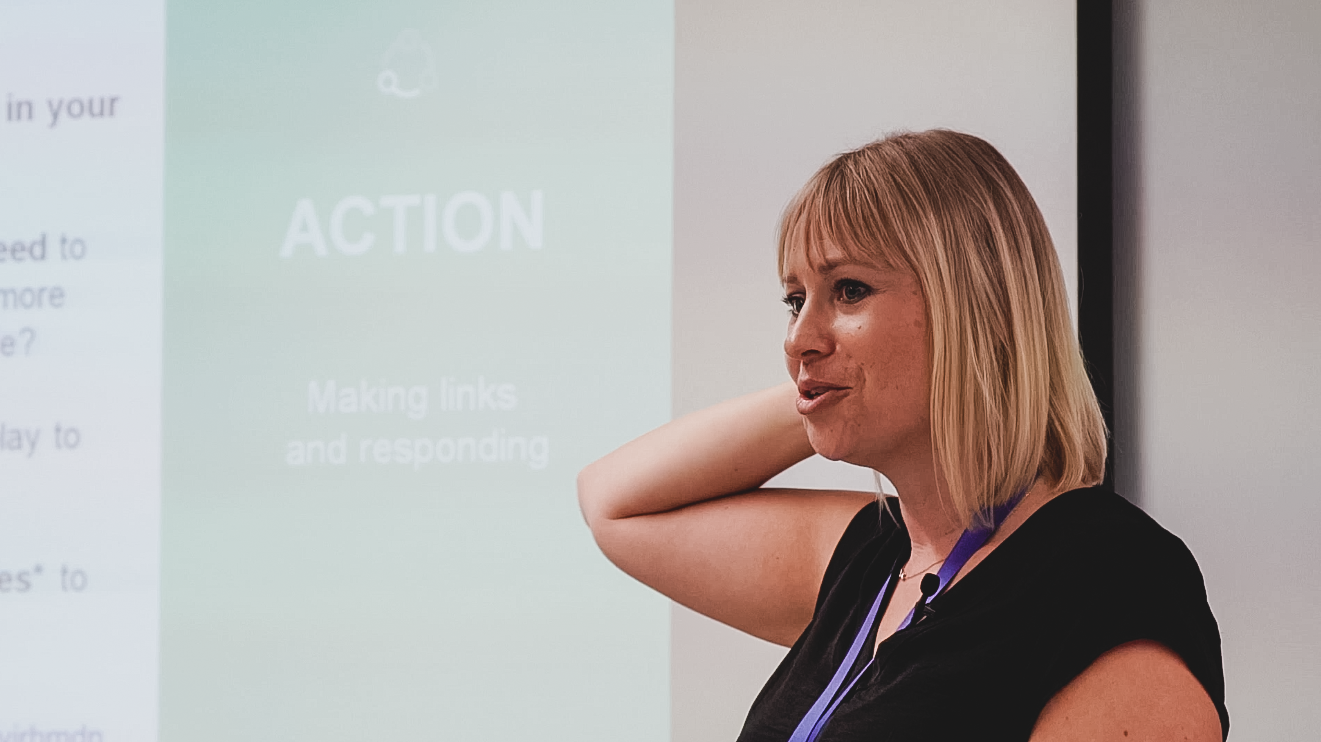 The workshop was a fantastic start to Making Sense in Barcelona and a great way to bring more attention to how Civic Tech might be used to catalyse change. It also sets the stage as we begin our beta pilot! By suspending disbelief and eliminating all the rules, participants began to get to the heart of how we make decisions, and how technology can empower ground level change. What was clear from this workshop is that this is just the start, and that there is a need for more of these projects that give people a tangible understanding of how Civic Tech can operate in their communities. We are looking forward to seeing how this develops!